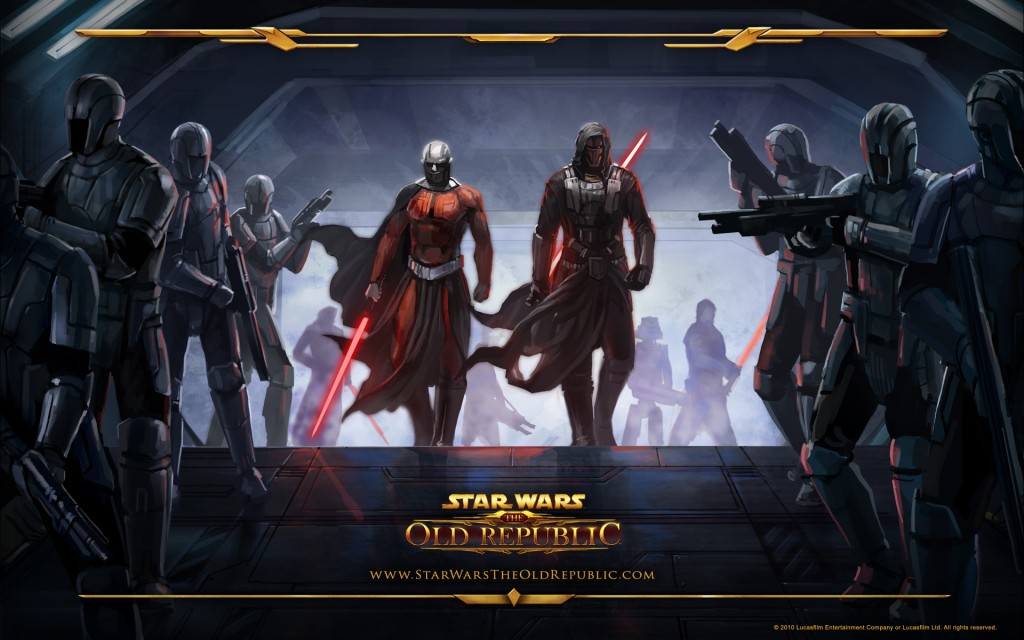 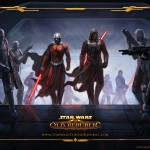 Star Wars The Old Republic is a new MMORPG that has started this week, with early access to those of us that ordered and registered back in July.  I’ve been playing it for around a week now, so I thought I’d get down some of my thoughts on the game.

You may recall the last MMO I played was Rift, which I blogged about a couple of times earlier in the year.  I still have very fond memories of Rift, if things had gone a little different could very well still be playing it and in many ways it will be the yard stick by which I measure other MMO’s.

Although I had access to the Beta, the two weekends came at times I could game as I was in California!  This meant I joined the ‘Harmless’ guys at a bit of a disadvantage, but of course they’re  a helpful bunch and have brought me up to speed. 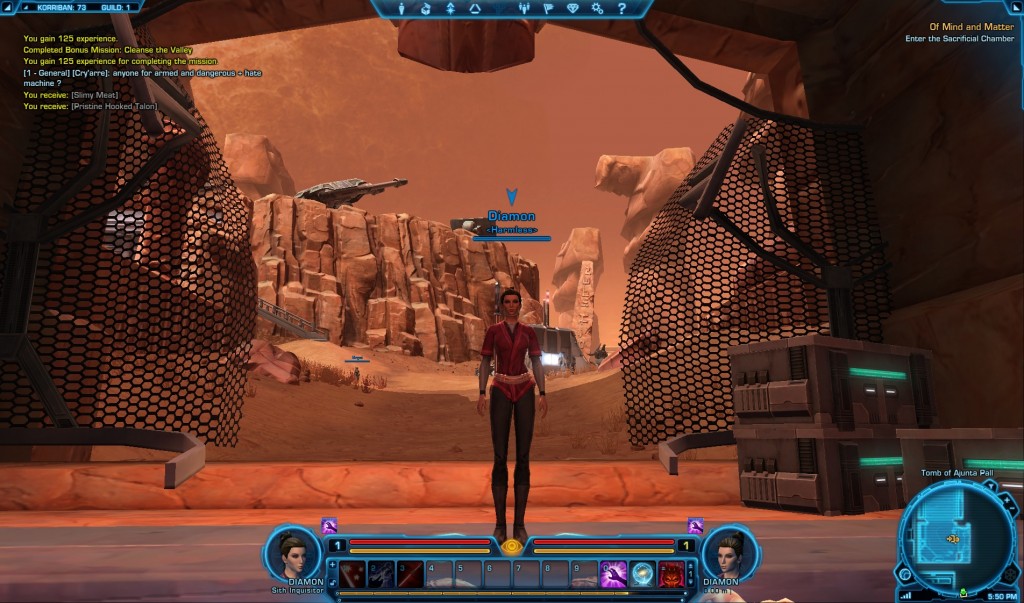 The first amusing thing was, I got home from work having received my invite to play e-mail around lunch time and everyone is on Mumble, but playing League of Legends.  I logged in and it asked me if I would like to create our guild?!?!  It turns out, even though I’m no hardcore Star Wars or MMO fan, I was one of the first to register my pre-order code, so I was allowed access on the first wave of invites.  There would be around four waves the first day and two or three of the other guys made there way on around 8 or 9pm.

There is no denying SWTOR is a nice looking game, but probably no better than Rift of even Age of Conan.  Basically it’s just what you would expect from an MMO in this day and age.

My first dilemma was which race I would play.  I set up 3 characters across three of the four races.  Then, I must choose what class they are to play, again from four options.  As I get to level 10, I then choose one of two paths for that class. 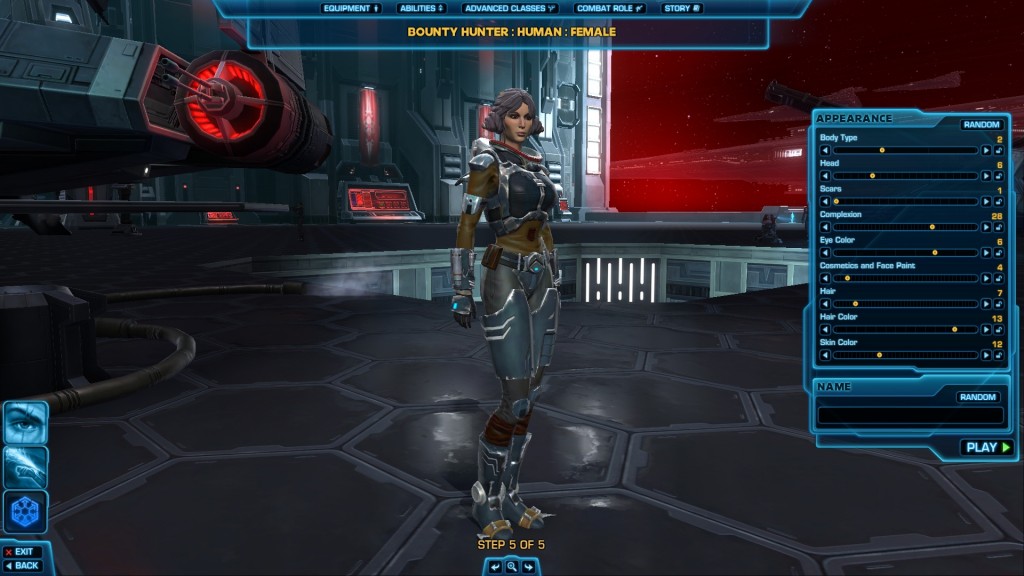 It would appear with Diamon I can be an Imperial Agent or Sith Inquisitor in order to be a healer.  I choose the Inquisitor route, which would split to Sorcerer to heal at level 10.

The first thing you notice is the amount of ‘cut scene’ and voice acting that takes place as you take a quest.  I have to admit, in pretty much all MMO’s to this point, I click the quest giver and I click ‘Next’ until I have the quest which is normally ‘go kill 10 of these nasties’.  With SWTOR you can’t really do that.  Everything is explained to you buy the NPC quest givers and it’s really drawn me in.  I am quite enjoying the stories, even now that I have a character up to level 19, still I get all the voice acting.  I’ve heard this is around 900 hours of it in all.  Impressive! 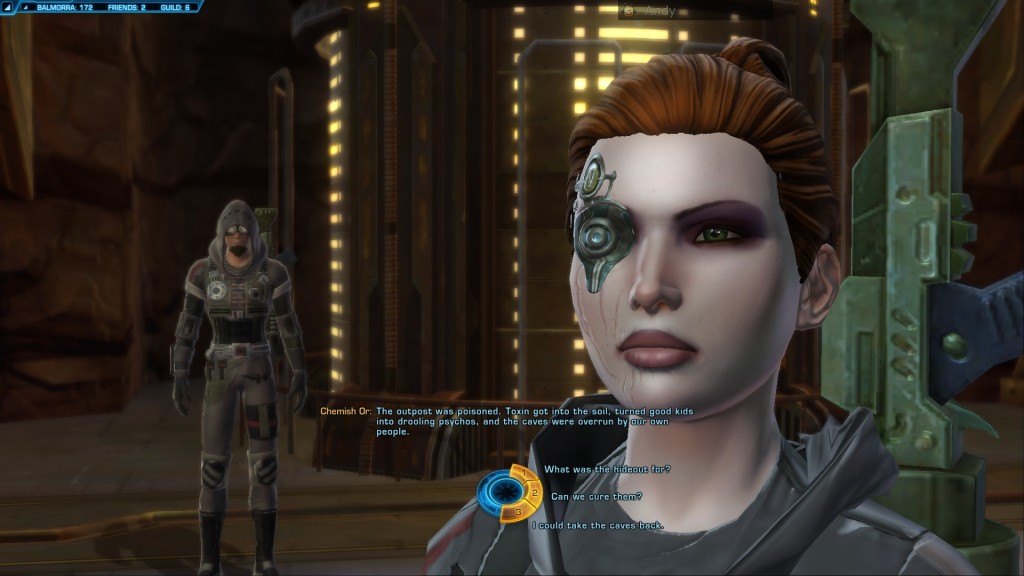 As the quest giver is talking to you, you get opportunities to respond to them.  These responses have little effect on the final outcome of the conversation (in most cases) but can gain you points in either the light side or dark side (if you’re a nice or nasty character).  Once you have a pet, or ‘companion’, they like when you respond in a certain way and you get affection points.  My current companion likes me to boast and be sarcastic…  which works for me! 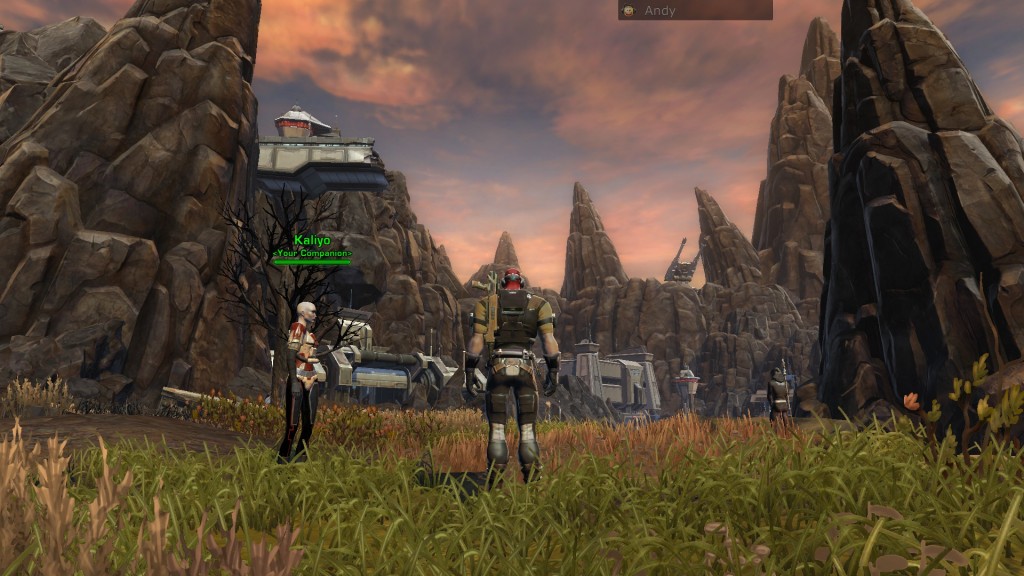 Most quests seem to have better points to them than just kill stuff and come back.  When you’re sent to upload a virus on 4 droid cleaner bots, the bonus quest would be to kill 30 Droid Guards.  You can do this, or sneak round and just do the primary quest, your choice.

The scenery and locations are certainly very nice looking, but thus far they seem a little ‘samey’ and I soon get bored with all the running I have to do. When I hit level 25 I believe I can buy myself a speeder bike, so I’m looking forward to that in a week or so.

By the time I got to level 12 with Diamon, I realised I was perhaps in the wrong class.  Apparently Imperial Agent would be the best healer, which by chance, I had chosen when creating alts to reserve names!

So, ‘Andy’ the Imperial Agent set out into the big world of SWTOR! 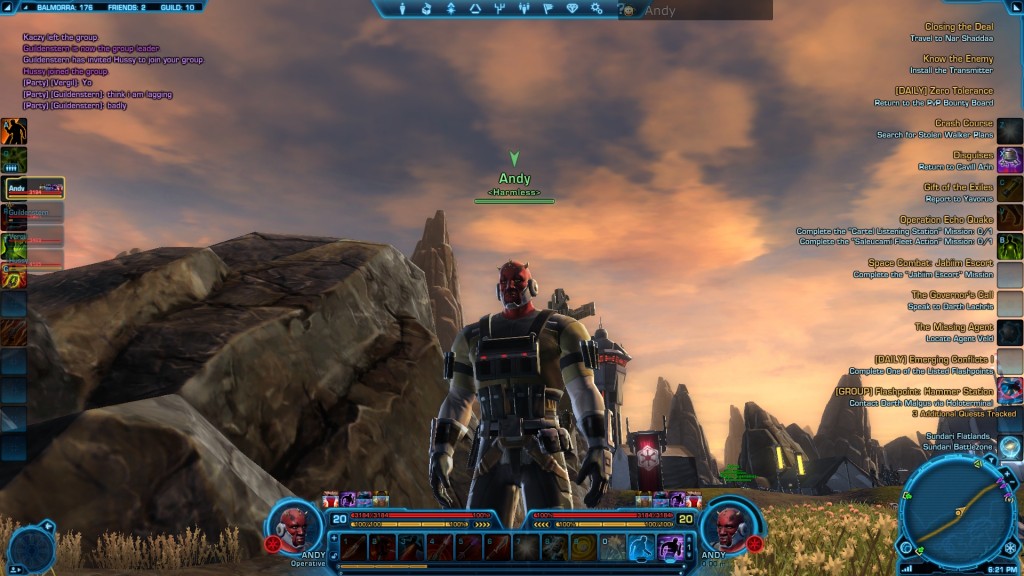 An Imperial Agent is effectively an Imperial Spy.  You get to sneak around in stealth, lie, cheat and kill lots of folk.  The story line of the quests is of course very different, so it was quite fun to work my way back up to level 12, where I’d left Diamon.

I did realise though, there wasn’t really a great deal of advantage to the IA over the Sorcerer.  I still really only had one healing ‘spell’.  Maybe I was spoilt with from my level 50 healer on Rift, where I had around 6 healing spells to juggle. A little reading and I can see, even at high levels I only really have two heals to use.  I little disappointing to be honest. 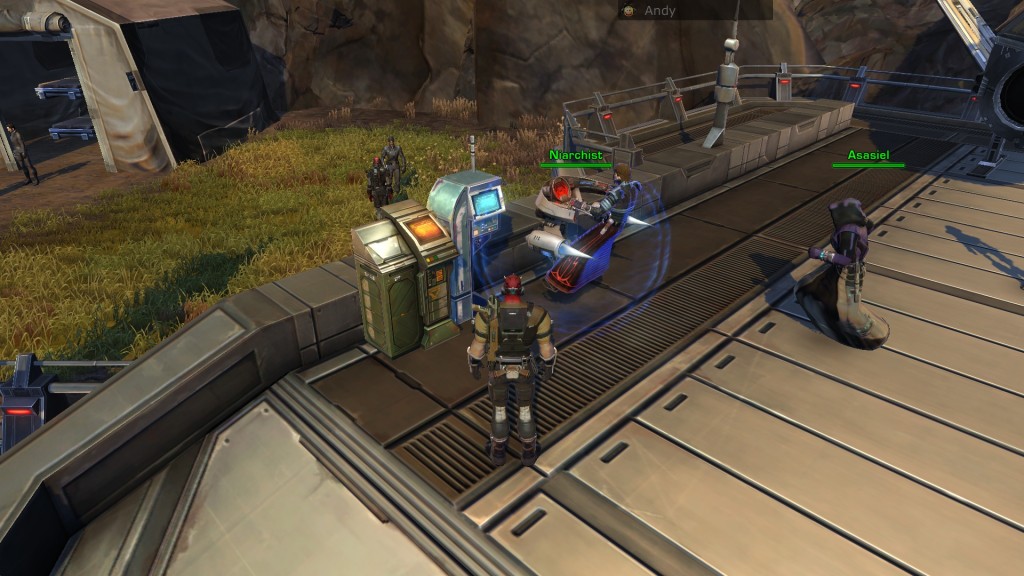 From level 10 you’re allowed into a Warfront.  At this point there are 3 different types of Warfront. Hutball is a futuristic game, you grab the ball from the middle and pass and run it to the opponents side to score.  There’s another that works in a similar way to a rush game on Battlefield.  You attack two points and try to blow up one of them, then progress to the next, until you get to your target after three areas.  Then swap and defend the points.

The third type I’ve only played once, but it’s a domination type (again, like conquest on Battlefield) where you capture as many of the three points and hold them to score points. 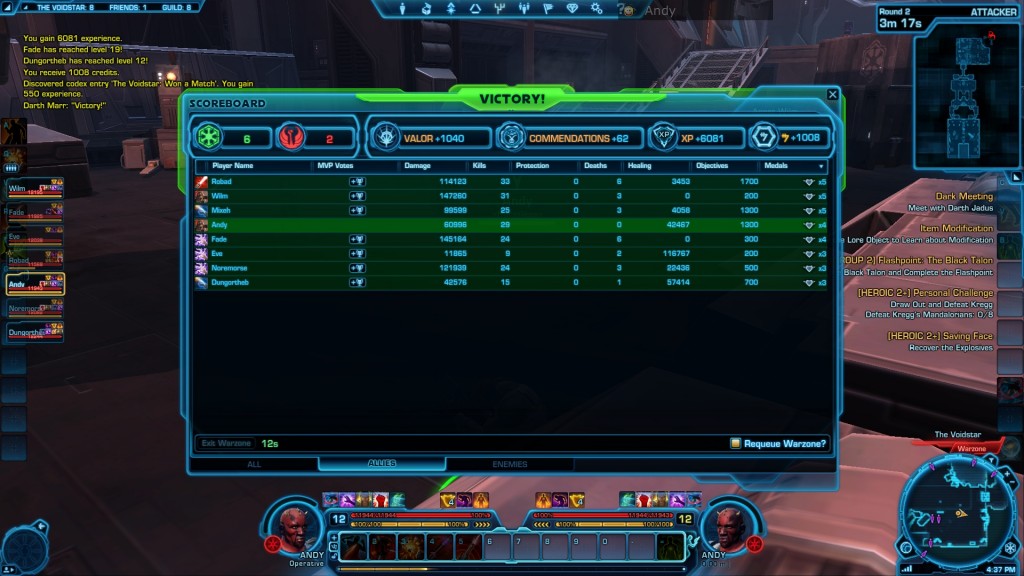 The games are pretty good, but for some reason there’s not level ceilings so I’ve been in these games as a level 16 against level 40’s.  Whilst your skills get boosted, you don’t get the actual spells/programs so you’re at a massive disadvantage.  Why they would do it this way, I really don’t know.

The one advantage this does give is that Guilds can group and play Warfronts much easier, as pretty much anyone can go in together.  I’m actually behind most of the guys in Harmless, but I grouped with a few of the 40’s recently and we had great success working as a team in the Warfronts.  It’s probably also the most fun I’ve had in the first 10 days of playing too. 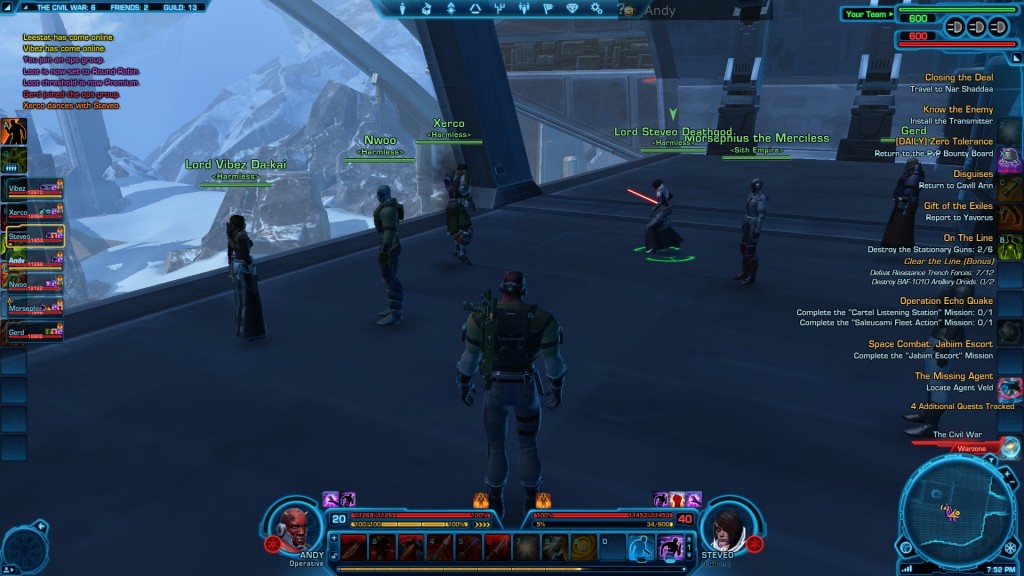 I’ve not delved into the crafting system too much just yet, but like Star Wars Galaxies, they’ve tried to take the grind out of it.  As you progress through the game, you pick up several companions.  These guys, gals and robots can be sent off to look for resources or even to build items for you, while you carry on killing things!  You can also reverse engineer items.  So if you loot an amazing blaster, you can try and learn how to make it.  I think there is the very likely possibility you may just break it and learn nothing though, but I like the option.

As I’ve mentioned, there is a fair bit of walking so far.  There are three transport options for me.  On a planet I can find a Taxi point, which will allow me to take a taxi to any other taxi point, or there are recall points (generally near Taxi points) that I can transport almost instantly too from pretty much anywhere on the planet, but this can only be done once every 30 minutes. 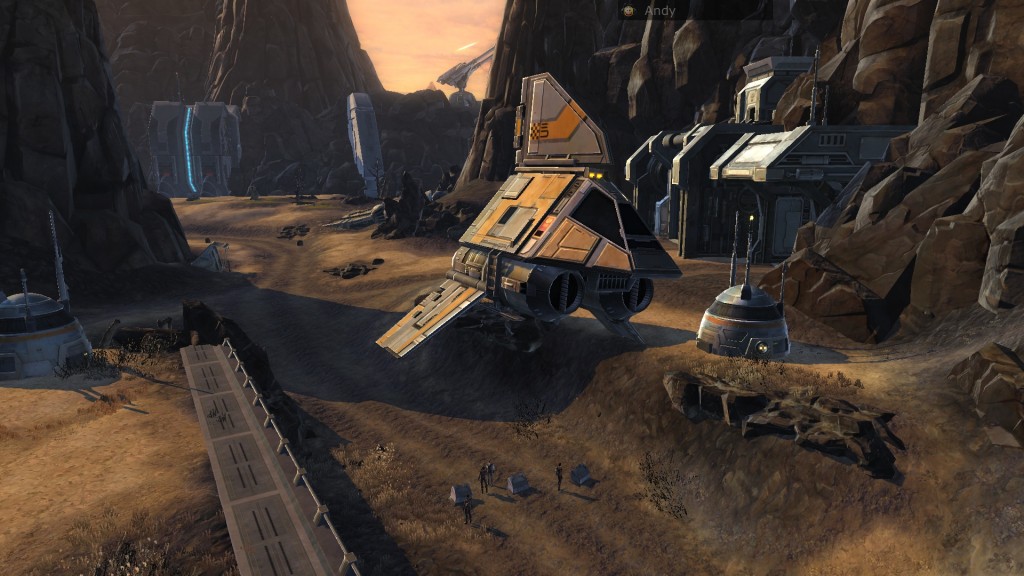 Then around level 18 you get given your own space ship.  You can do mission in this, or simply use it to get from one planet to another.  The missions are quite fun, but also rather simplistic.  It will be interesting if the space aspect gets expanded as the game continues. 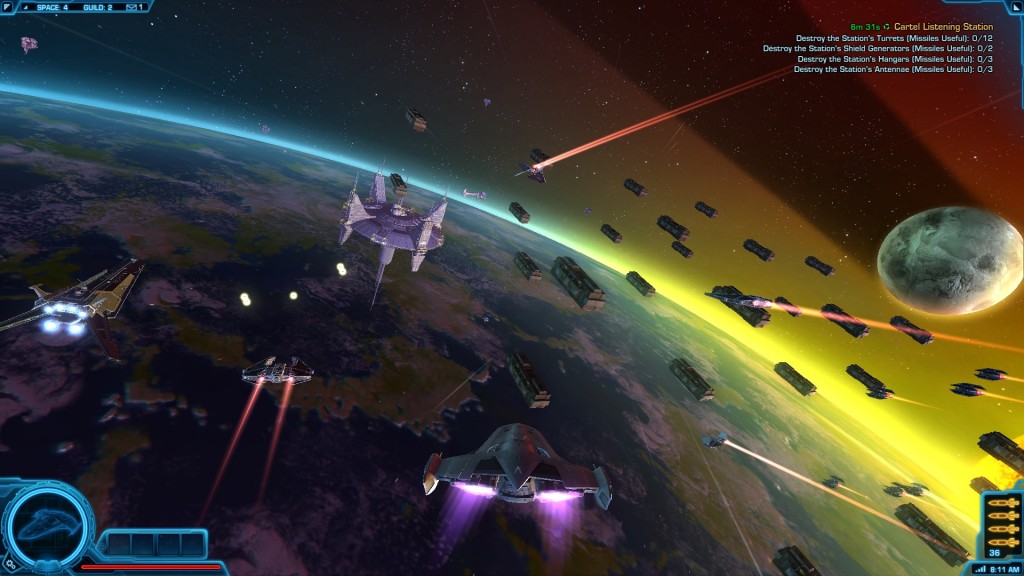 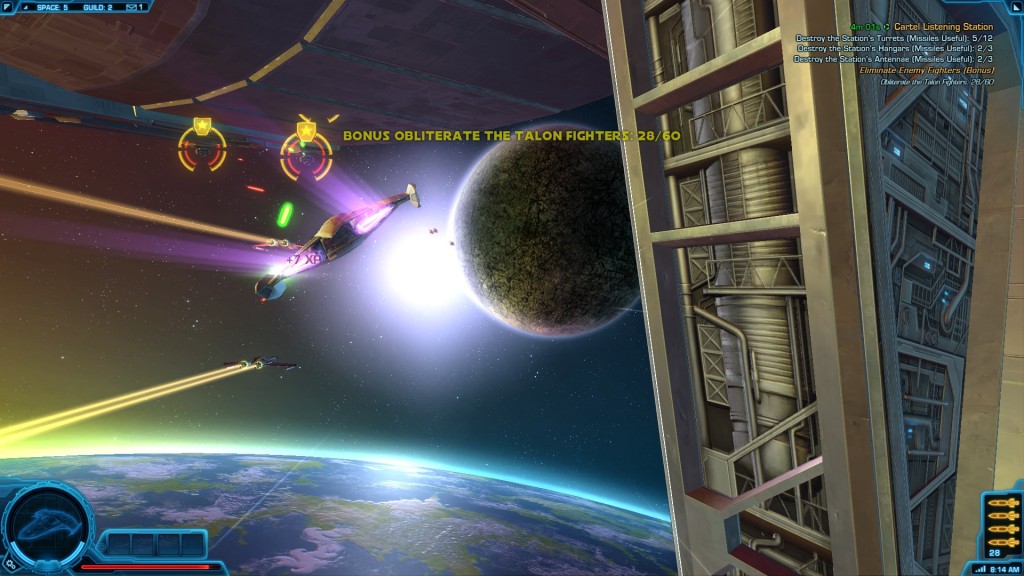 Yesterday it went on general release and it will be interesting to see what happens to server queues.  Already there is generally an hour queue to get on in the evening, if it gets much longer than that, it’s not worth even trying!

Even though I’ve clocked up around 40 hours of game time, it’s still very early days.  It is rumored to take around 200 hours to hit the maximum level of 50. Right now, although I’m really enjoying the story line, I’m not as hooked as I was with Rift. Will I make it as far as level 50?  Only time will tell…