One reason I do this blog is to remind me of things I’ve done, almost like a diary.  It’s interesting, even only 3 months later, to look back at my beginnings in Rift.  I left off asking if Rift would move up through my all time played games according to Xfire.  Well it did.  I commented I played 30 hours in one week, far more gaming than I’d done in a long time, well Rift soon took all of my spare time and it peaked up around 70 hours in a week, now sitting in 2nd position with 649 hours played in a 3 month period.  That’s an average of around 7 hours a day!

I’ve only topped out a character twice before, in Ultima Online and Star Wars Galaxies.  Neither of these were really level based, like most modern MMORPG’s, so it was a new experience for me to reach ‘end game’. Quite quickly I moved Diamon to level 50, my Rogue and when me and 3 other Guild members (Hylo, Vibez and Lee) had the same week off, we took new characters and power leveled them.  As I usually play a healer, I made Bartholomew the Cleric.  With this done, I now had 2 characters at end game! 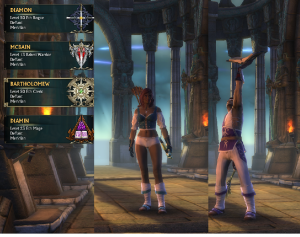 Everything was going well, I was enjoying the co-op type team play of instanced dungeons and collecting together the best equipment possible, to make both my characters powerful enough to join in the even harder content.

Unfortunately, the guild had quite a few Clerics at 50, and I wasn’t often chosen to play the healing role in a group.  Coupled with my character being pretty much as good as he could be, and a more intense time at work (FBS having just gone live) meant I’ve not really played in the last 2 weeks.  MMORPG’s are the kind of game that you need to commit 3 or 4 hours at a time too and I don’t really have that time now.  I don’t miss it too much, so it looks like my time in Rift may be done.

I don’t regret the massive time I invested and I would still recommend Rift to others.  I’ll probably still play it a little each week, but nothing like I have the past few months.  Who knows, maybe I’ll come back to it again in the future though.