I don’t play many computer games these days, it’s either I’m growing up or my obsession with gadgets is taking over…  I think the latter is more likely.  The games I do tend to still enjoy are those that let me develop and build the skills of a character or play to gain achievements of some kind.  MMORPG’s (Massively Multiplayer Online Role Playing Games) fit the bill here, but it’s often hard to find a good one.

Way back, before broadband and unlimited internet, I would spend literally hundreds of pounds (well, okay, one phone bill was over £100 anyway) playing Ultima Online.  Friends from work had it and we’d meet up of an evening and go kill things (and other people) in dungeons.  They made many changes and this eventually faded into a newbie friendly, boring game.  Others have come and gone, Anarchy Online, Star Wars Galaxy was a great one and more recently Warhammer Online hooked me, for what Xfire tells me was 247 hours.  I don’t enjoy fighting computer generated enemies so much, but play them for PvP (player versus player) which Warhammer did very well.

Now comes Rift, the most recent game to join the MMO scene.

I knew nothing of Rift until a few days before it’s early start, due on Thursday 24th February.  Khan and Lestat had mentioned it on the Lanarchy forum and I thought I’d give it a go.  It felt like a good couple of years since I’d last enjoyed a decent MMO, Aion had been a disappointment so hopefully this would be different enough to stand out. 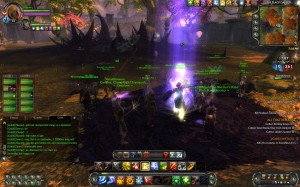 I bought it on Steam and at 6:01pm on Thursday I connected in to the game and selected the server we’d chosen.  Despite me only being 60 seconds after the servers were due to come up, I was 1,997th in the queue with an estimated wait of 2 hours!  Initially this number dropped quite quickly, probably many people deciding to change server.  As the number in the queue dropped below 1,000 it really began to slow down.  I check their forums and new servers were being opened up to cope with the demand, but we’d all chosen this server, I dare not leave as maybe another server would have just as big queues.  I was down below 1,000 of a queue reportedly 7,000 long!

3½ hours later and I was in.  I made my character and off I went in to the game world, for a couple of hours before bed.  The next morning (I was on holiday this week, the last week from my previous years holiday) we decided we should switch servers.  Each time we connect we would need to queue to get in, so we moved to Shivermere, another EN PvP server.

There wasn’t a great deal I saw that seperated the game from other MMO’s.  For me, Warhammer set the bar very high and Rift probably didn’t quite reach this from initial impression.  What it did have was polish.  Most MMO’s struggle in their first month or so, ironing out bugs, suffering through server crashes, players finding exploits, Rift doesn’t seem to have any of this.

I do like, what seems to now be standard in MMO’s, the Warfronts which are effectively small mini games against the opposing faction.  The first you see is a ‘Hold the Fang’ game.  You hold the item to score points, but it damages you more and more over time.  First team to 500 points wins!  Others include a domination type game, hold different points on the map to score.

The Rift itself refers to huge tears in the sky, through which nasty things arrive.  They appear anywhere on a map and people will flood to the area to fight them off as a team.  I see them as public quests were on Warhammer.  The better you do, the more you contribute, the better rewards you get.

As I progressed through the game, I started to find what Rift brought to the table, adaptability.  Initially you choose to be Mage, Warrier, Cleric or Rogue.  Within each of these classes there are 8 ‘souls’ or skill sets, each with their own benefits and special moves.  Within your character you can choose 3 souls to make up your core.  Once I reached around level 15 (out of 50) I was able to buy another core, unlock more souls (3 come free, simple quests unlock the other 5) and set up a different core with 3 different souls.  You can then switch cores within seconds.  Eventually you’re allowed 4 cores, each giving very different game play. I now have a DPS (high damage, but low defence) Range (uses a pet, hits damage from range) and a PvP build (set up specifically with skills to take down another player) and each provide a very different playing experience.

In the first 5 days of Rift, while on holiday, I somehow put in 30 hours of gaming!  I don’t think I’d gamed that much in years!  Now, just short of 2 weeks after release, I’ve played it for 48 hours, moving it to 10th in my all time games time list on Xfire.

It helps that we all got into a decent guild, with voice comms, so you can sit and chat with people while you play.

My rate of gaming has dropped again, now I’m back at work.  Just 8 hours in the last week have been me sitting at Rift and moving my Rogue character ‘Diamon’ up to level 27 along with ‘Bartholomew’ my Cleric, now at 13.