Unfortunately, Suzuki didn’t seem all that keen on selling me a GSX1250FA.  Trying to arrange a test ride on one seemed impossible!  Then, as my Varadero went in for it’s 16,000 mile survey the lent me a Honda CB1000R once again.  This is the bike I used for a day 3 years ago and it pursuaded me to move up to a 1000cc bike.

Back then I didn’t think it would be a good idea for me to own such a powerful bike. I was also a concerned by how small it was, but while I had this little ‘naked’ (no fairings) bike for the morning, I put a little petrol in it and rode round North London for a while.  What fun it is to ride!

As well as it having all that power, it also stops in a matter of meters and is so small and light to weave around traffic.  I managed to keep the front wheel on the ground the whole time too!

So, now I wanted one, off I went one Wednesday morning, the first stop was Chiswick Honda, who had a one year old ex-demo listed at £6,500.  Unfortunately this bike was actually at their Letchworth branch.  Add to that the guy only offered me £3,000 for my Varadero and I was rather disheartened.  Still, I had 4 hours before work, off I went to a few other  bike shops.

Now the only decision was the ex-demo bike or a gorgeous new, matt black CB1000R.

I offered I would take the new bike if they would drop the price to £9,000, but the best they would do is £9,500 so I took the one year old Tri Colour from them.

On Monday I agreed on the extra’s I would like fitting, tail tidy, crash bungs, heated grips and custom G&G Exhaust along with 2 year extended warranty (I’m not getting stung £1,400 for a gearbox on a 3 year old bike again!)

The week I had to wait before I could pick up the new bike on Saturday was one of the longest weeks I can remember.  I even didn’t sleep very well on Monday night!

Finally the weekend was here and I said my goodbyes to the Varadero.  Much as it had cost me, it served me well.

What a great weekend.  Not only did I pick up my new bike, but the sun came out and I got to ride with some friends up to Rutland Water on Sunday, stopping in at Dunstable Downs on our way back. 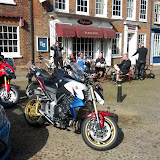 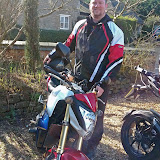 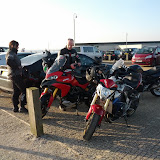 Over the weekend I did maybe 300 miles, and loved every one of them!  Granted, the CB1000R is no where near as comfortable as the Varadero, but it’s so much fun to ride.

I also have a few more mods to fit, a rear hugger, under tray, belly pan. This leads my thoughts to turn to security.  A £180 chain is on it’s way, bike alarm to be fitted tomorrow, IP camera to upload pics of drive every 10 seconds and new security light to be fitted as soon as possible! 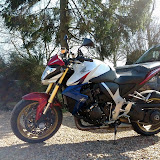 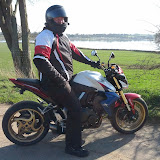 Lets hope the gearbox lasts on this bike!