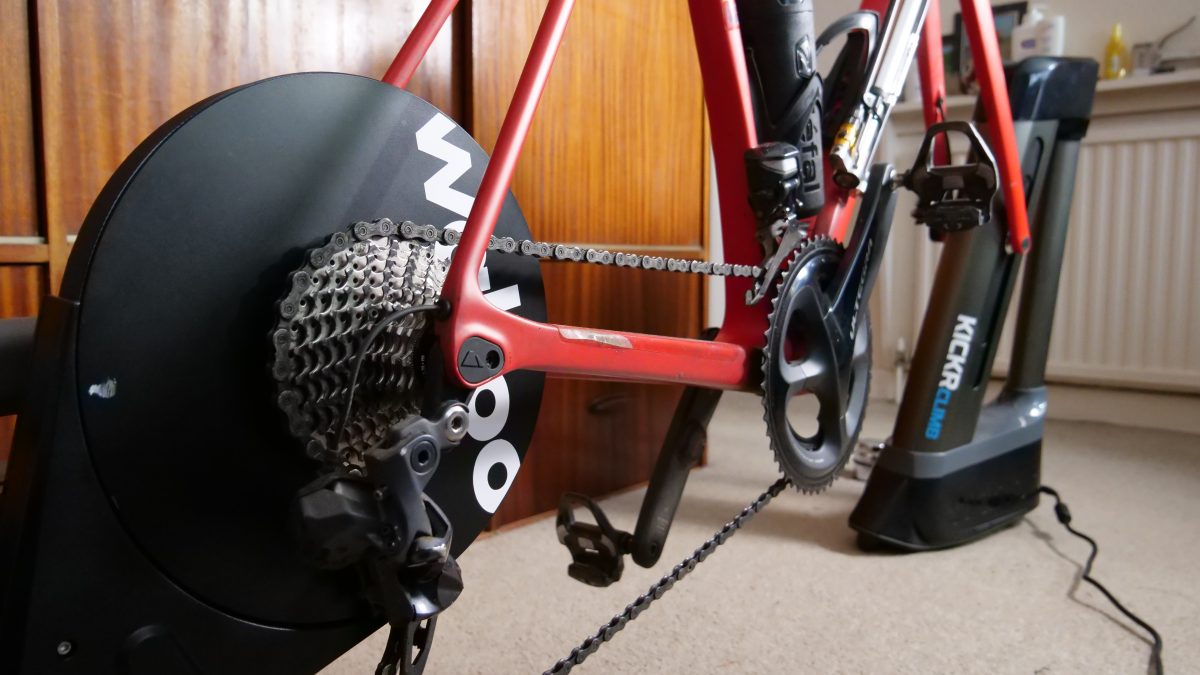 I’ve really got into cycling over the last two years, but I’ve never been a big fan of cycling indoors, it just doesn’t hold the same appeal. No sun in your face, no views to take in, no coffee and cake stops and no exploring the nearby countryside.

Last week though, I upgraded my Turbo Trainer to a new Kickr with a Kickr Climb and I have to say, it’s made quite a difference to the riding experience.

There are a number of benefits / advantages to indoor racing.

Right now, not only is it cold and getting dark before 5pm, but literally right now, it’s snowing outside! Much as I’ve been better at sucking it up and getting out there (I rode in -1oC temperatures in January) it’s definitely much harder to motivate yourself to head out when you know there’s a good chance you’ll be in pain by the end of the ride!

Even though I’ve been cycling for almost two years now, I would only really count one ride as anything close to a race. I did a Sportiv back in September 2019 and whilst technically not a race, everyone had timing chips… and I was quickest over 50km!

Meanwhile, on Zwift there are multiple races going on every hour! On the new turbo trainer, now I can really put the power down, I’ve done a few sprint races and found (to no real surprise) that I’m better at these than the longer 1+ hour races.

I call it a sprint race as they were only around 10 miles, lasting about 24 minutes. Last nights was with a friend from work, so I stepped up to Cat C to be able to ride in the same race as him. Given I’m generally near the back of Cat D I was just trying to not finish last!

There were 85 showing as in the race as we started, I ramped up to around 300W as we rolled off the warm up and found myself sitting in 50th as we actually crossed the start line.

I held this position, in a pack of around 7 or 8 through the first of 8 laps. After a couple more laps I realised that gradually our group was reeling in those that went out too quick and couldn’t keep the pace. I noticed my Heart Rate had hit 160 around by the time we were 4 miles in and was wondering if I would be able to maintain this pace myself! Annoyingly, any let up of power and the pack would start to pull away, so no chance of a breather!

As the lap timings came up, I could see my friend had the 7th fastest lap, so I knew he was mixing it up with the leaders and there was no way I would cope with that so I needed to just stick with the pack I was in. I was surprised to see though, at around the 6 or 7 mile mark at one point that I led our pack, I was 24th! Unfortunately I simply couldn’t maintain the power to hold this position though. A small breakaway group left us and I stayed with the main pack.

With sweat pouring from my head, my heart rate now bouncing off 170 we closed in on the final few corners as the display shows 700 feet to go, I made my spring effort. What I didn’t count on was 1) everyone else would do this too 2) we’re already pretty much sprinting, so there’s not much more to give! Of the 5 or 6, two riders got a small gap on me and although I started to close right back in on their wheel, it was too late and the finishing line was on me… to be honest, much to my relief!

35th! Given I was in a new category, expecting to be somewhere near the back, I was very pleased with this result!

Of course, you can do proper planned training outdoors, but doing it on a turbo trainer, in a controlled environment is simply much easier. If a plan has ‘maintain 300 watts for 2 minutes, then drop to 150 watts for 5 minutes and then burst at 400 watts for 10 seconds’ you can do exactly that, without the worry of other road users, road conditions, climbs or descents. It’s just much easier.

I plan on taking advantage of this myself in the very near future. Zwift has quite a selection of training plans built in for a variety of purposes. There’s one, for example, that is specifically to help you ride for greater distance. Then there’s a few that are FTP builders (designed to increase your cycling power) ranging from plans for beginners to advanced plans. You even do plans mixing cycling and running, but these might be harder if you don’t have access to a treadmill.

Much like training, these can be done outdoors, they’re just much easier done indoors in a controlled environment. So, what is an FTP test?

FTP is the gold standard measure for cycling performance and it’s useful in all types of events from sprint triathlons all the way through to multi-stage cycle races like the Tour De France.
Knowing your own FTP enables you to track your progress, analyse your rides and set accurate pacing strategies for your key events. The term FTP stands for Functional Threshold Power and it’s a measure of the best average power output you could sustain for 1 hour in a time-trial scenario.

Whilst you should really be giving it everything you can for an hour, to work out your FTP, indoor trainers tend to use shorter tests and then do some maths on them to calculate your FTP. For me, this morning I did a Ramp Test on Zwift. This is a test that starting at 100 watts, increases by 20 watt steps every one minute. It will then take you best minute, so the highest average amount of watts for one minute and use 75% of this as your FTP. So, I go to the point it changed to 400 watts and gave up. This gave me an FTP of 289.