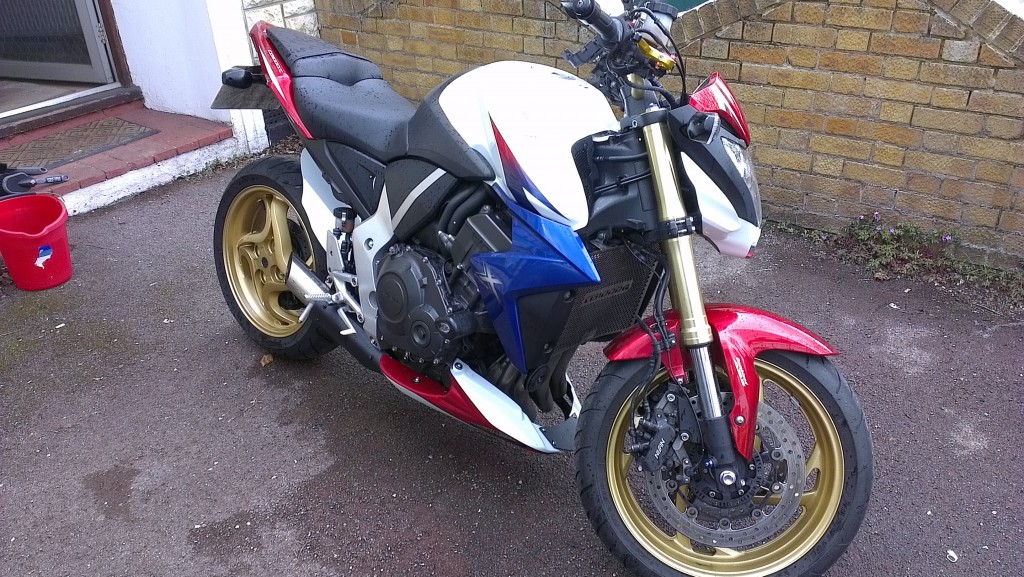 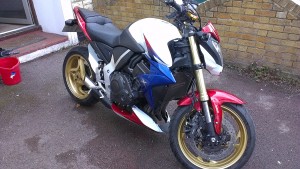 I’ve had my CB1000R for exactly 7 weeks now.  In that time I’ve already covered 3,000 miles including a camping trip to Dover and a day out to Belgium!

One of the main reasons I bought this particular bike was because I LOVE how it looks.  I think it’s the bike version of a Ford Mustang.  It’s not the most aerodynamic looking bike, it’s not the most comfortable but it looks mean, vicious and full of power.  That doesn’t mean there weren’t things I wanted to change or add though!

Over the past few weeks I’ve (well, mainly a friend) added a rear hugger, a radiator grill cover, removed the rear pegs, added gold break and clutch levers, mirror extenders and a belly pan. I think now I’m just about done!  Maybe a Pillion Seat Cowl at some point (a cover instead of the passenger seat) and a screen for longer distance riding, but I think the screen might spoil the look, so it would need to be detachable.

With such a great looking bike, one of the first thing I wanted to sort was some decent security, so a new motion sensitive light goes up, with a camera in the window which will e-mail me pictures of anyone on the driveway. As well as this, the bike will be secured to my car with a top of the line Almax chain!  All I have left to look into is a tracker.

Finally, this week I bought myself some new (well, sold as second hand, but have never been used) Alpinestars 1 piece leathers and I’m all ready for my first track day!

Now I’m looking at luggage options and it seems Kriega do some very nice gear.  I’ve bought a R25 Rucksack and US10 Tail Pack to give me places to pack things should I go travelling.  I’ll maybe get one of their US20 (20 litre) tail packs will be a good addition, a slightly larger pack that will clip and release from the same attachments of the US10.