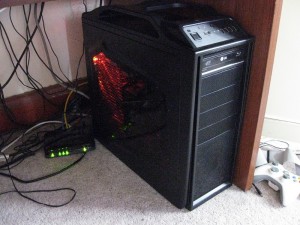 I’ve been toying with the idea of building a new PC all through the year, mainly based on the Blue Screens of Death I’ve experienced on my old machine, mainly when playing Bad Company 2.  Mid way into summer I found the crashes to be down to a dodgy stick of RAM, which I replaced, but still I had an itching to upgrade.

I was rather surprised when I discovered it was actually a month off of two years since I built the machine I was using right now.  With the Beta of Battlefield 3 on our doorstep and Star Wars: The Old Republic due in the next couple of months, I thought maybe I should get it over with and build myself something new.

I had a look at a few places that build a machine for you but they all looked a bit pricey for a top end rig that I was eyeing, so I headed off onto the internet to find the best prices.  I assembled my shopping list and placed most of the orders through Amazon.  My new machine would be – 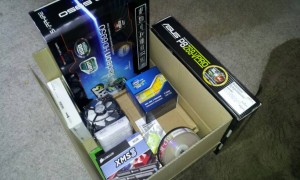 The first thing that arrived was the solid state drive.  Of course, I couldn’t wait for everything else, so I installed it into my current machine and stuck Windows 7 on it.  Wow did it make the PC fly!

A few days later and everything else arrived, on my day off, barring the case.  Again, me being Mr Impatient I decided to install the new parts into my old case and then simply move it all over once the new case arrives.  Perhaps a mistake…

The first problem I had was the CPU and motherboard.  When fixing it in place, it sounded like the pins were being crushed flat.  Obviously a little concerned I opened it back up to take a look at what I’d done.  It did indeed look like I’d squashed the pins on the motherboard flat.  I poked about to see it there was any possibility of standing them up straight.

It didn’t look good, but I carried on, hoping it would be okay.  As you might expect, it wouldn’t boot, it wouldn’t even post.  Sure enough, a little light on the motherboard next to the CPU told me there lay the issue.  Rather annoyed, I realised I would have to build the old machine back into the case I had and deal with a return of the motherboard.

Having built it all back in, I turned the PC on with no result.  Off and on again and I could smell burning… which is never a good smell.  A close up sniff of the SSD told me it was curtains.  Unfortunately, none of the other HDD’s would work either, so I assume the old motherboard was now burnt out too!

It looked like I would be without a computer for a little while! 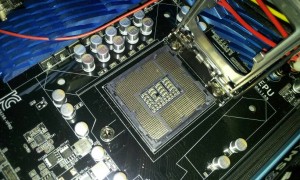 Using my file server downstairs, I did some investigating and apparently the pins are supposed to lay down at an angle in this motherboard.  It was actually far more likely that my poking around caused the damage.  Although this was annoying to find out, it made me think if I at least replaced the motherboard, I would be more comfortable fitting the CPU, knowing they are supposed to be slanted.

The case arrived, so after work I headed to Tottenham Court Road to do some haggling.  With my RMA’s filled out, but no idea whether I would get a refund, I set myself a target to replace the motherboard and SSD for £450 or less.  Online I’d paid around £415 for the two, so I was rather happy to haggle YoYoTech down to £420! 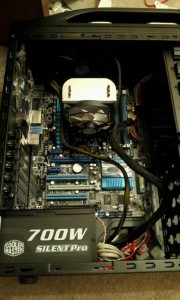 Once home, the task began to build everything into the new case.  Instantly I was liking the quality of the new case and taking great care installing the CPU, I tested early and this one would post!  On with the build.

Everything else was pretty smooth sailing, apart from me not realising I’d managed to unplug the network cable from downstairs into the router and that was in fact why I couldn’t connect to the network.  One of the most surprising things is how quiet it all is.  Three fans in the case, one huge fan on the CPU, two fans on the graphics card and a couple of fans in the PSU and I can hardly tell when the computer is turned on!

With Windows 7 installed, the machine certainly was smooth.  Battlefield 3 looked amazing and smooth, as did F1 2011.  Not only could I play these games at high level settings now, but I could even record myself at the same time, with no loss to performance, meaning I could finally capture my pwnage on Bad Company 2!

Now all that remains it to try and recover the video files I had on my storage HDD.  Aparently I should be able to swap the controller board and still access the files.  I thought I had a match, but it’s a slightly different part number, so I’ve bought an old one on Ebay today. 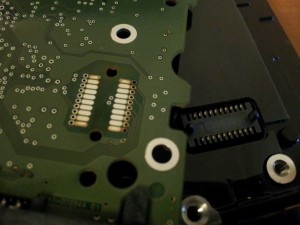 Once the files have been recovered, the plan is I will then return it to Samsung under their 36 month warranty and hopefully get a new one!

It’s been quite an ordeal, and might end up being much more expensive than I first thought (if I don’t get a refund on my damaged/blown up parts) but I’m happy now, on my blazing fast, top end machine!