In 2001 we (Rob, Ady and Nurcan) moved in to Dukes Ave. Finally somewhere we could settle for some time. Four years we spent there until a ‘scare’ that the owners might need to move back in made us decide we should perhaps just find somewhere new.

After much house hunting, we chose the huge 4 bed, 3 story house on Wentworth Avenue.  Eight years we lived, mostly happily, in Wentworth Avenue.  A few issues, we got through a washing machine, dish washer, no heating for one Christmas, dangerous electricity and lights that would trip the house out.

When we were told in 2013 that it would be the last time they renew the contract and we had 14 months left at Wentworth, I decided it was time to get on the property ladder.

Help from the family meant the bulk of a desposit would be cover and I would have to save for the stamp duty and solicitor fees, around £11,000.

In January we started looking for places.  I’d seen a financial advisor in Central London, he’d advised me I could get up to a £280k mortgage, so off I went!

I thought I’d found the place, a 3 bed house off Oakleigh Road North with a driveway.  Unfortunately, as we tried to move forward with a £280k mortgage, it turned out I couldn’t afford this much!

So, in comes Robert and our spending limit goes up considerably, provided Robert passes the credit checks. We decide on a £300-£350k price range and we start again with the house views.

One place we saw, in Burnt Oak, was a very nice house, 3 beds, garden, HUGE driveway, but unfortunately the burnt out Fiesta and abandoned fridge/freezer on the street somewhat put me off the area.

The search was narrowed to Finchley, Whetstone and Barnet. This meant we were generally looking at flats, but we would at least be in a nice area.

We saw four or five different flats, all were reasonable, but each one, one of us found something we didn’t like, until finally (4th Feb) we saw a two bed in Barnet with a garage.  Nice size, both bedrooms had a decent bit of space, reasonable sized living room, slightly small kitchen, but in good shape and very importantly, a garage up behind the flats for my bikes to go in.

The agent said the owner was hoping to sell quickly as he wanted to move his mother out into a new property that they had lined up for her.  The asking price was £325,000, so after a little thought, on Friday 7th February, I called and offered £310,000.  The agent called back, as I was on my way to Hendon RAF Museum to meet Robert, to say he thought we were very close to a deal, but a little more would be needed.  I offered £315,000 and explained that was our limit as this is what we had our Agreement In Principal for.  Within two minutes the agent called back, we had a deal!

What I didn’t know, this was just the start of a very long wait.  Our current rental agreement was due to end on May 4th, which gave just under 3 months for us to complete the sale.  Easy, right?

The mortgage itself was agreed and accepted on the 19th of March, things still seemed on track. Unfortunately, the flat’s management company didn’t have the swiftest of solicitors and we were still waiting on documentation from them as it approached and passed early April, which I was originally told by Foxtons that we would be exchanging.

Luckily I spoke to our current Landlady, who had found a buyer for the house and we agreed on May 24th as when we would move out. It was apparent quite quick that this wouldn’t be possible too.  The thought of having to move into a temporary abode, then move once again into our actual flat sounded far too much trouble!

Luckily, the new buyer of the house we were in was happy enough to rent to us at the same cost until we were able to move out.

Finally, on the 27th May it was confirmed that the we’d bought a flat! Collection of keys was agreed to be Friday 13th June, 2014. I would have to work that Saturday and Sunday, but booked the following week off work (at my new secondment store, Brent Cross).

Next came packing up the house.  By this time, both Noel and Paul had both already moved out, at the beginning of May.  I’d used the front bed room to store boxes from packing I started in April, so I thought, once moving week comes, I would have less to do.

I did have less to do, but…  there was still a mammoth task ahead of us.

We had a BT engineer booked for Monday morning, John Lewis delivery of the washer/dryer and dish washer the Monday evening, a van for the bigger items for Tuesday and I had a work outing to Royal Ascot on the Wednesday, so it would be quite a busy week.

Mum was also due to come down on Sunday evening and stay to Tuesday, to help pack up the kitchen.

Friday the 13th came and up we went to collect our keys.  It had been over 4 months since we’d seen the flat, so was quite exciting to see it again.  Initially it seemed smaller than I remembered and plans of how everything would fit in seemed quite a challenge. 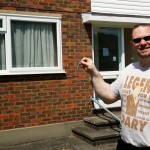 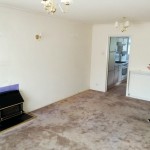 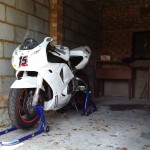 When mother arrived on Sunday evening, we decided to try a restaurant in the Barnet area, so walked up the steep hill of Meadway and found ourselves a curry house.

The first problem came on Monday, from a call from BT.  They wanted to confirm my install for the 27th June!  It turns out, they tried to test the line, but couldn’t (as we hadn’t moved in yet!) so they post-poned my booked install.  My angry discussion later and I had them move it forward to Friday 20th.

It turned out that that would be fine, we had plenty to do between now and then.  Its only when you’re actually packing that you realise how much junk and rubbish you build up in a house that you’ve lived in for 8 years.  Also, moving a huge 4 bed house into a small 2 bed flat, really isn’t an easy job!

The next problem I encountered was with the plumbing.  There was a pipe all ready in the kitchen for the washing machine and the big american fridge/freezer, but the water pressure was too low for them to actually work.  A week later I would have a plumber come and connect the pipe to the mains water line, but for now, I would have to swap the washing machine and we would be without a dishwasher instead.

On Friday, the BT engineer was with us nice and early.  Here comes our next problem.  He notices the power and the phone line are separate, he’s not supposed to do any more than plug the modem in he tells me.  He uses our extension cable and an ADSL splitter to connect up the hub.  All seems to be okay, I have a download speed… but as the driver heads off up the street, I realise the connection has dropped out already.  It basically wouldn’t hold a connection for longer than 15 minutes at a time. Not ideal if we’re planning to watch TV over the internet and not bother with Sky.

It would take a couple of weeks, but eventually an engineer would return and be amazed and disgusted at the half job the first guy did.  He fitted a box properly in the living room and we’d run the cables under the carpet.  Unfortunately this didn’t fix our problem and I would need to buy a different Openreach modem and over a month after moving in we would have a stable internet connection.

As we approached the end of the week, it was apparent that we wouldn’t be out on Friday evening as agreed.  Luckily the new owner was a very flexible guy and was happy enough for us to finish on the Saturday and drop the keys through the letter box.

The keys went through the letterbox around 11am on the Saturday morning, after a few more trips to the tip and it was all done, we were moved.  All that would be left is the task of unpacking.

I remember when we moved into Wentworth, I think I counted 10 trips with a van for us to move.  This time, I lost count.  With the van on Tuesday we made two trips to the flat and two to the tip, but there must have been around 10 trips with the car and trailer and Robert made 2 or 3 himself in the car while I was at Ascot. 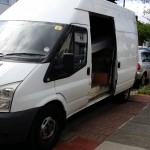 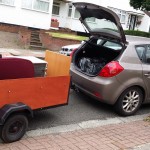 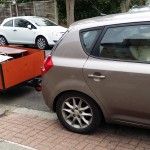 The good news is, now we’re on the property ladder, we will hopefully only ever be moving into bigger places and moving will be easier again!