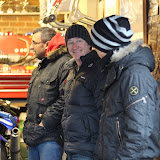 Ever since my crash at Brands Hatch last year, I’ve had people telling me I must get the suspension set up properly for me on my bike.  This weekend I finally got it sorted!

It wasn’t the best weather to ride down to Surrey to see Brian, but it was worth the trip.

Rich and PJ were hosting a weekend for LondonBikers members to head down and have their bike’s suspension set up at a slightly discounted rate by the expert Brian, who would also impart much of his knowledge on the subject. 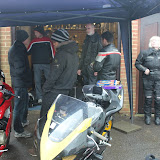 Saturday had been the busier day with 3 or 4 bikes being done.  It turned out the others booked on Sunday had decided against the ride in the rain and had cancelled.  There were others hanging out and talking bikes, Rich was working on a bike at the back of the garage and Amit turned up to see what he could learn too.

Brian started off by checking over the bike, checking some of the bearings, tyre pressures and such. We did find later a funny knocking caused by a bit of play in the forks at the front of my bike, something will need tightening at some point! 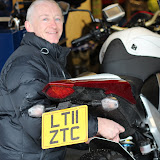 The first setting to play with was the dampening. An easily adjusted screw in the middle of the top of the suspension makes it less or more ‘bouncy’! Just half a turn open seemed to be a good place to be.

The basic logic of setting up the suspension works around how much I lower it by sitting on it, how balanced is the bike with my weight on it and how does it react as I brake, accelerate and corner. 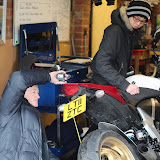 A measurement is taken with the front and rear wheel off the ground.  This is the starting point. The ‘sag’ is then measured with the bike standing and with me sitting on it. Brian also took it out for a ride to get a feel of it and had an initial opinion that it was sitting forward too much.

A bit of tweaking, adjusting the pre-load and the ‘Rider Sag’ (how much the bike lowers with me sat on it) had been reduced from 42mm at the front to 40mm and from 55mm to 48mm at the back.  Without me sat on it, the ‘Static Sag’ (the bike taking it’s own weight) had changed from 34mm to 30mm and 17mm to 10mm, front and back respectively.

I was a little sceptical, so many people saying ‘it feels like a totally new bike!’ having had their suspension set up properly, but I would admit, the bike felt more stable and better balanced.  It was hard to really push it hard with the roads as wet as they were, but on accelerating and breaking, the bike seemed to hold it’s position better, not dipping and rocking as it did before.

With what I’ve learnt, I’m thinking I’ll have a go at setting up my track bike myself.  It would be the most technical thing I’d done to any of my bikes!

To see all photo’s from the day, head here.