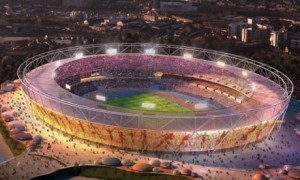 There is one thing I’ve been able to ‘participate’ in, and that’s to get a look at the torch as it passes by.  The torch has made its way round Britain, they say passing within 10 miles of 95% of the population, so with it passing within 300 metres of me, I figured I should make the effort and go see it.

As I examined the route, I realised I could have two shots at seeing it.  Once in Hendon, just a 5 minute ride away and then again as it came up Ballards Lane.

Day 67, I have the week off work and the torch is due at Middlesex University at 12:47pm.  A little late I got myself to Hendon for around 1pm, but as it turns out, they were stopping for lunch and wouldn’t be due past for 40 minutes.  Still, I had myself a good position, my parking was paid up for an hour and I had no-where else to be!

As it turned out, as the procession made it’s way down Church Road, the crowds swarmed in and it was every man for himself.  That in itself wasn’t such a problem, I was taller then most and could use the swivel screen on my Rebel T3i to hold it up over my head. Unfortunately, as the torch itself came down the road, carried by Rupert Grint (he plays Ron Weasley in ‘Harry Potter’) the crowds just engulfed him and it was almost impossible to see what was going on.  Looking on the Telegraph website, it looks like I missed the best photo opportunity up at the Uni.

So, with Hendon a bit of a let down after a long wait, I headed back to Finchley, a quick change into something lighter (the temperature touching on 30 degrees) and I made my way up to Ballards Lane.

Perched on a bit of wall outside the Church, I had a much better viewing position.  Within 5 minutes the beginning of the procession came through, followed by a young lady with the torch.

Much better photo’s this time.

There, I’ve now done my bit. The Olympics can carry on, with me working out at Chesham I don’t need to be affected!