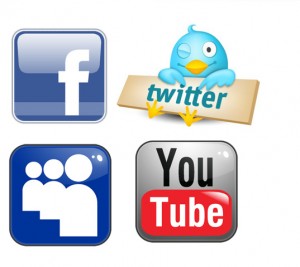 Then came Twitter.  I very much like Twitter.  It’s just a great way of receiving information that is usually relevant to you.  You follow people of interest, as well as friends and you have first hand information at your finger tips.  Right now, I can follow a live score of the Farnham Knights playing against Tamworth, as someone is there tweeting updates.  Follow the developer of the ROM you use on your phone and you’ll be the first to know when he’s uploading his latest build.

The downside of Twitter is there are no privacy settings and no easy way of holding conversations which everyone can follow and participate in.  This is where Google Plus comes in.  For me, it takes the best from both worlds.  You can follow anyone and everyone but you can place them in ‘Circles’ to control your privacy.  If you want to send a message to just close friends, you can do, only those in your Friends circle will see it.  If you want to send a public message, you can still do this.  Those seeing the post can then comment on it as you would with Facebook.

Then, of course, there is a tight integration with other Google services such as Picasa (which I understand will soon be called Google Photos) which is great because I’ve been using Picasa for a long time.  Better integration with Gmail, Google Docs and other services is expected in the near future.

The Android app is another strength.  Not only is it clean, smart and easy to navigate, making it just as nice to use as the full fledge website, but it has some extra tools built in.  Firstly is Huddles.  Send a message to a person or a whole Circle and they are brought into a group chat.  This then operates as Google Talk or any other message service, but uses Googles push notifications to keep everyone informed of new messages.  Then there is the instant upload option.  If selected, any photo taken from the phone is instantly uploaded to a private folder in Picasa.  You can then very easily share selected photo’s in a post in Plus.

Right now there are two things I would like to be added.  Firstly would be the ability to use circles in a ‘venn diagram’ type way.  In other words, I might have lots of people who are bikers, but maybe only a small portion of these are friends that I might want to invite out on a ride.  If I could say ‘Friends’ in ‘Bikers’ this would be very useful.  Instead, I would need to make two groups for each type of person I want in my circles. The only other thing is a simple shortcut to let people know.  Twitter is very simple, tell someone to follow @AndyCr15 and they will know what to do.  If they can set something up that would make me +AndyCr15, it would be easier for me to ‘advertise’ myself.  There are 3rd party websites that have done this, so right now I can let people know gplus.to/AndyCr15, but it would be better of Google implemented something of their own.

All in all, Google Plus seems a great new social network.  Already there are somewhere between 10 and 20 million users and it’s still invite only.  It will be very interesting once it’s open to all.  Anyone with an Android will probably try it, many with a Gmail account too I would think.