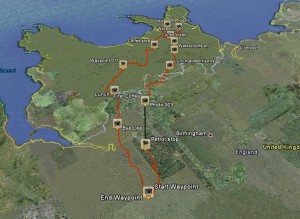 Although I’m sure we would have all much preferred a nice sunny day, the weather certainly provided some dramatic looking scenery, clouds balancing atop mountains and such. It did slow us down somewhat, with greasy looking roads and plenty of tight turns, you can’t be too safe. 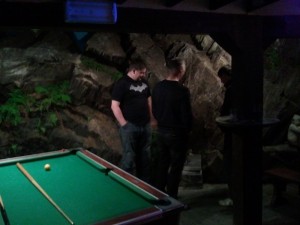 We made 5 or 6 stops on the way up, coffee, petrol and of course lunch meant we arrived at our hotel around 5pm.  A great meal, a few drinks (Bailey’s shots for Mike!) and a 3 all tie on the pool table finished off the evening.  An interesting feature of the hotel was the mountain the was part of their pool room!  After much inspection we decided, yes, it really was a mountain!

In the morning, with the rain still pooring down, we decided we wouldn’t hang about too long in Wales and make our way back to the much drier England.

As before, we still made plenty of stops on the way back, but opted for fast roads as we got down out of the mountains.

The final stats showed we’d done 375 miles from Little Chef and back again.  The highest we reached was 7,000 feet and our average speed was 39 miles per hour.

To take a look at the route, use this file with Google Earth and check all the photo’s here.