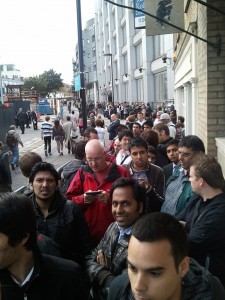 As part of my duties for hemorrdroids.net, I went along with some collegues to the HTC London event being held in Farringdon last night.  Partly encouraged by the promise of some free phones, partly just really looking forward to playing with the new HTC Desire HD and Zed, we got their nice and early at 3pm.  Not surprisingly, we weren’t the first there…

The Facebook event had around 1,000 confirmed attendees, so we half expected there to be 100 there already but in fact there were only 4 or 5 people there before us though. Luckily there were two seats, of which I took one of so no knee and back aches for me!

Waiting in the queue turned out to be almost as interesting as seeing the devices inside.  Quite a few people had heard of our website and I met a guy I’d talked phones with on the XDA forum, so that was kinda cool.  The 3½ hours moved by pretty quick chatting phones and gadgets.

By the time 6:30pm rolled round, there were about 400 waiting outside of this venue and reportedly 200+ more at the second venue.  They explained they would be letting in 100-150 at a time, they would be allowed to stay for an hour and then they would be asked to leave so the next group could come in.  I guess you either wait before opening, or wait once it’s opened… you’re waiting one way or another! 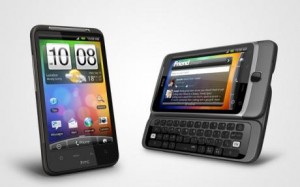 We were given a raffle ticket as we entered and offered wine or a bottled beer.  It was a free bar, but will me riding home after, I stuck to the coke.  At the back of the restaurant they had two podiums, each with two Zed’s and two HD’s with a guy from HTC telling is about them and demonstrating some of the new features of Sense UI.  It wasn’t long before we were moved on from there to allow others to come and have a play.  Luckily there were a couple of guys wandering the floor, one with a Zed and one with a HD.  The guy in a HTC shirt with the Zed wouldn’t let anyone hold it, even to try the keyboard he held and I typed…  The man in a suit with the HD was a bit more relaxed, he let us play with the HD in our own hands.  Raju had said to him we were from Hemorrdroids.net and he said he’d seen our site and gave us his business card!  When I looked at it later, the guys a Director of HTC!  A useful contact to have, if he replies to our e-mail at all.

Both devices were nice, but I wasn’t blown away by either really.  The HD (the one without the keyboard) is very nice with it’s 4.3″ screen and I will probably give it a go, but I can’t say it has me aching to own one, now my Samsung Galaxy S is running so smooth.

It wasn’t until 7:40pm that food finally made an appearance.  Even then, a few mini burgers and some weird mushroom thing, both of which were pounced on by the hungry crowd as soon as they were brought out.  HTC were only expecting around 200 people, which is what they get in most towns around the world.  They made quite a point of thinking everyone and couldn’t beleive the response.  It was a shame that they then only raffled one HTC Wildfire after we waited so long.

Still, it was quite an experience and hopefully we made some good contacts.