Earlier this year I upgraded my phone to a Nexus One.  Not my first Android device, but my first on a big screen.  I took the plunge as I was fairly confident there wouldn’t be any better hardware released in the next 6 to 10 months.  It wasn’t long until the HTC Desire was then released here in the UK.  The Desire is pretty much HTC’s version of the same devise that I have, but with a couple of changes.  They use their own Sense UI interface that I loved on the Hero and it has physical keys. Losing Sense UI was something that kept me with the Hero for a month after the Nexus One was released…

Anyway, last week an opportunity presented itself that meant I could try the Desire without any real financial risk, it was at such a good price, selling on for a profit would be very likely.

Of course, the first thing I did was root it and put a custom ROM on it.  This wasn’t as easy as with the Nexus One, Linux was even needed to push some files onto the Device at the time.  Still, I did it and had full control of it. 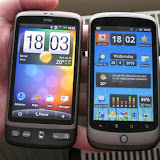 My immediate thoughts where that it wasn’t really that different from the Nexus.  It felt a little better in my hand, a little sturdier, maybe a better coating on the back.  Apart from that, there really wasn’t much different. The physical keys felt good, no more not being sure if you’ve pressed a key or not.

So a few days later I’m actually missing my Nexus One (lent to my brother).  With his own Desire now arriving, I moved back to the Nexus and got it set back up again.  Who would have thought I would miss the touch keys.  The physical keys take quite a firm press, sometimes dislodging the phone if I’m not holding it too well. It’s actually quite nice just touching on them again.

Then comes the trackball, on the Desire, although they moved away from touch keys but brought in an optical trackpad.  Quite often I would catch the trackpad when pressing other keys.  Other times, when I wanted to move my cursor round a text message, it seemed rather hit and miss. Aside from that, the Nexus One has the advantage of a glowing multicolour trackball for notifications, which I also missed. The final point, with Cyanogen ROM on my N1, I can press the trackball to wake it, which hasn’t been implemented on the Desire yet.

So what other things sway my decision?  Again, with the custom ROM on my Nexus, I get an audio boost from the earpiece making phone calls sound much clearer.  Add to this how much better the ROM support actually is with the Nexus One and the fact the 2.2 update will almost definitely come to the N1 first are quite big factors (The Hero is only just beginning to move to 2.1 now). It wont be long before a fully working Sense UI ROM will be out on the Nexus One too, then that would be one less advantage the Desire has over it.  The fact I can boot to recovery, perform backups, restores and flash ROM’s without the need for a computer is also rather cool.

I could also mention how I can have my Nexus undervolted (uses less power) and overclocked (10% faster CPU) may only be an advantage until some of the developers start on the Desire, if they do. The Nexus One seems to have a higher ‘nerd factor’ attracting the real clever developers.

The final advantage for the Nexus One is the second mic.  A mic on the back is used for noise cancellation which enables the voice recognition and better call quality… apparently.

Strangely, when I got the N1 back in my hand, it felt better.  Thinner, lighter (not sure this is the case) and generally a nicer shape.

All in all, I honestly believe the Nexus One is the better device, so it’s staying put.  Off to eBay I go!