I think the problem with my knee started back when I was 20, playing for the Leicester Lemmings, I intercepted a ball and was running it back when I was tackled by someone swiping my foot, twisting it behind the other foot and I fell on my knee.  I played on at Quarterback, literally limping or hopping to play.  It swelled up like a football so I went to the doctor the next day.  They booked me in with a specialist who then booked me in for an MRI scan.  It was 9 months later that I had the scan and they then booked me back in to see the specialists.  In my stupidity, everything felt good by then and I was busy with work, so I cancelled.

Around 5 years ago I hurt my knee badly again.  This time it was diagnosed as an MCL injury, as someone fell across my legs tackling me.

Last season (28th June 09) playing for the Cheetahs again my knee seemed to twist as I jogged to the line of scrimmage.  I carried on, caught a Touchdown on the next play, had to catch another on the other side as there had been a holding penalty and once again battled through the second half at Quarterback. 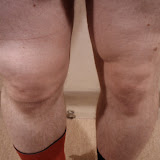 The knee swelled up again, so this time I decided to get it sorted once and for all.  Hopefully, worst case scenario I have to have my ACL repaired, I miss a season and I can play 2 or 3 more before I’m done.  Unfortunately, when I finally got to see the knee specialist in November his tests indicated it was more likely my PCL that was damaged, which there’s very little that can be done.  In his professional opinion I would never play American Football again…

The MRI was booked for Christmas Eve and then I was back to see Dr Mellor in February.  The scan showed there was a problem with my PCL, possibly ruptured, I had some arthritis on the bottom of my femur and a torn meniscus on the top of my tibia.  There were also some bits floating round in there.  In a few of weeks I received my hospital appointment for keyhole which would take place on April 20th.

So, last Tuesday was the big day.  I got to the hospital around 2:45pm, perfect timing, we went through after maybe just 10 minutes and had to change into the relevant clothing (disposable pants really aren’t very flattering). An anesthetist came along and explained about putting a tube down my throat and it would probably be in when I wake up, I’ll pull it out and possibly be sick. Okay, wasn’t nervous until now, thanks… A nurse had also spoken to me ‘You’ll feel tired, don’t fight it, just let yourself go to sleep’ No problem there, I was kinda tired already, so looking forward to a nap! 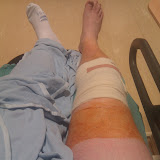 It appeared that Dr Mellor was running late and the first person didn’t go in until just before 5pm. I would be next and at around 5:45pm I was lying on a hospital bed with them inserting a drip into my hand.  The anethetist explained he was going to inject something that would help me relax. I watched him do this, I don’t even remember closing my eyes, but the next thing I recall was opening my eyes and hearing the nurse ask if I was okay.  Two hours just vanished in the blink of an eye!

They seemed to be in quite a hurry for me to move on then, luckily mother wasn’t too far away.  They explained a few bits to me, checked I could walk without the need for crutches and off we went!  I was surprised how good I felt at home, I was expecting the drugs to wear off and I would start feeling pain but it didn’t seem to happen.  I didn’t sleep to well though, maybe just because I wasn’t very tired after my 2 hour deep sleep earlier.

The next day things still felt pretty good, a couple of little aches here and there, but nothing more than I had before the op!  The bigger worry for me was the hiccups I just couldn’t get rid of.  It almost felt like there was something in my esophagus.  I did a bit of Googling and found this does happen on occasion after general anesthesia.  The tube used to fill you with gas can cause irritation of the vagus nerve, which runs down next to your esophagus and controls your diaphragm, which then can cause serious hiccups.  Last night I was also getting a lot of pain from what felt like a golf ball stuck in my esophagus, but I guess it was just gas. 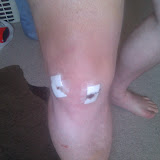 Yesterday morning the bandages came off and I was able to take a shower.  It all looks pretty neat, some dried blood behind the dressing, but everything’s still stuck on good and proper.  The dressing patches themselves need to stay on for another week, so I may book in at the doctors for a nurse to deal with those.

This morning so far no hiccups, no pains in the chest and the knee’s feeling pretty good too! I will continue to play it safe though, staying off my feet until I’m due back at work a week on Monday.

I have a follow up appointment with Dr Mellor at the end of June.  He took some snaps of my PCL while he was in there so I guess then I find out if he wants to operate on that too.  Hopefully there’s still some life left in the knee, even if it’s only 5-a-side football!